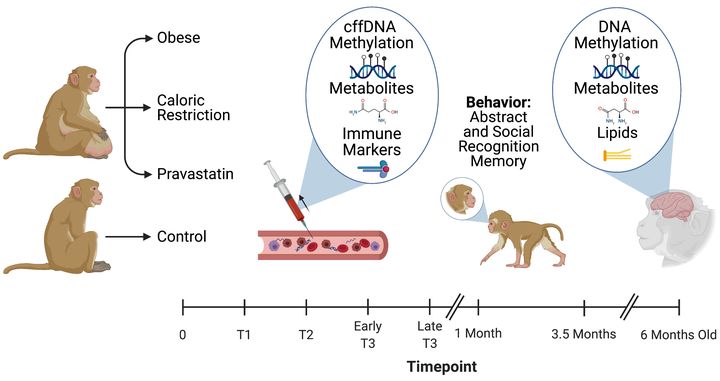 We have characterized the association between placental and brain DNA methylation profiles in two complementary projects. In the first project, we examined a mouse model of prenatal exposure to polychlorinated biphenyls (PCBs) and characterized a shared subset of DMRs mapping to neurodevelopmental and cellular signaling genes in placenta and fetal brain from the same mice. In the second project, we analyzed cell-free fetal DNA (cffDNA), which is derived from the placenta, and genomic DNA from a rhesus macaque model of maternal obesity. This non-human primate (NHP) model results in maternal immune activation and a neurodevelopmental profile in offspring that mirrors some behaviors of humans with autism spectrum disorders (ASDs). This NHP model also allowed for an examination of maternal obesity interventions. Strikingly, our results showed that cffDNA methylation profiles can distinguish fetuses exposed to maternal obesity from either matched controls or those exposed to a maternal obesity intervention. The DMR profiles represent alterations to genes involved in neurodevelopment and cellular signaling, which are also differentially methylated in the brain, and there is a significant overlap between the genomic coordinates of the cffDNA and brain DMRs. Additionally, a module of DMRs in the brain correlate with autism-like behaviors that were measured by our collaborators.